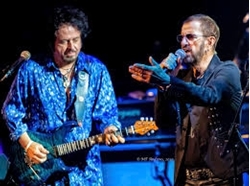 Ringo Starr, the famed Beatles drummer and two-time Rock and Roll Hall of Fame inductee returned to The Celebirity Theatre in Phoenix on August 26th with his All Starr Band – his first appearance at the theater in the round since a headlining show there in 2016. On this particular Monday, local Arizona night music fans had a choice between seeing Starr or The Rolling Stones at the Cardinals’ football stadium crosstown in Glendale. It was a difficult choice, but this choice was very rewarding.

The experience at the Celebrity Theatre was a very different experience in more ways than one. It has a much more intimate ambiance with a seating capacity of 2650. The stage is in the round and rotates throughout the show. Each fan had an opportunity to view the show up close and personal. The downside is that from any angle in the theatre, you are viewing the back of the band for half of the show. The show was sold out and it was obvious that everyone present was thrilled to be in the presence of a living Beatle.