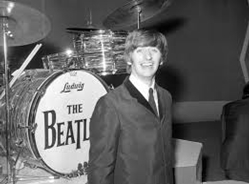 Ringo Starr has said he “never” practices the drums on his own, preferring to play with other people.

It seems ‘never practising” for Starr applies to just solitary playing, as he has been quite busy lately – recently releasing the album What’s My Name on 25 October this year.

Starr made the statement in Rolling Stone’s latest Artist on Artist interview, where has speaking to fellow drummer and Foo Fighters frontman Dave Grohl. Grohl echoed Starr’s opinion, saying “I don’t like playing alone. I only like playing when there’s music.”

Ringo went on to joke about the negative influence too many formal lessons, saying “when I’m doing shows, and people hold up their little seven-year-old: ‘This is Tommy. He loves you, and he’s taking drum lessons.’ And I always say, ‘I hope he’s not taking too many!’”. The pair’s extensive conversation also touched on shared influences, the development of Beatles songs’ themes and what Starr thought when he first heard Nirvana.