Ringo Starr Was the 'Most Approachable' of The Beatles Since 'He Didn't Have Any ... 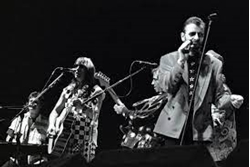 Many music fans would give almost anything to hang out with any of The Beatles. Thanks to his impressive drumming skills and incredible longevity, Ringo Starr has had a chance to rub shoulders with fans and fellow musicians over the years. One three-time member of Ringo’s All Starr Band was lucky enough to meet all of the Fab Four, and he said Ringo was the most approachable of the Beatles because he lacked the pretense of Paul McCartney and John Lennon. After the Beatles broke up, Ringo created a slew of solo albums throughout the 1970s and early 1980s. By the time the 1990s approached, he had the itch to tour. Ringo assembled his first All Starr Band in 1989, and he’s collected several of his high-profile musician friends for All Starr Band tours over the years.