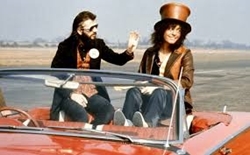 Though The Beatles had gone their separate ways, Ringo Starr seemed to be having a good time in the early ’70s. For Beaucoup of Blues (1970), Ringo flew to Nashville and cut an album with session pros in three days. He had a blast, and the following year he notched his first hit single with “It Don’t Come Easy.”

Meanwhile, Ringo was keeping his film career alive. After appearing in the spaghetti western Blindman (1971), he directed a concert film documenting the meteoric rise of Marc Bolan and his band T. Rex (1972’s Born to Boogie) for Apple’s film division.

Bolan, who clocked 11 top-10 hits (including four No. 1s) in the U.K. between 1970-73, proved to be an inspiration for Ringo in several ways. While hanging out with the dynamic songwriter-performer, Ringo got the idea for “Back Off Boogaloo,” his biggest U.K. hit. But Ringo nearly lost the idea before he could get it down on tape.