See the Documentary The Beatles and India 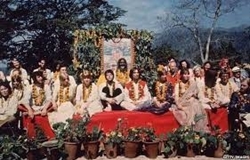 In all the nooks and crannies of Beatles Scholarship, the Fabs’ relationship to and time spent in India is one of the most interesting. In fact, it could be argued that no group did more to open Western ears, eyes, and minds to Indian music, culture, and spirituality than the Beatles did in the mid/late 1960s.

The connection is told in the fascinating 2021 documentary The Beatles and India (available on DVD & Blu-Ray June 21 from MVD Entertainment). It’s co-directed by Ajoy Bose (based on his book, Across the Universe—The Beatles in India) and Pete Compton.