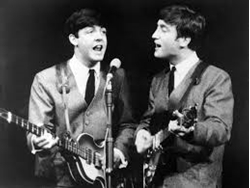 Sir Paul McCartney has opened up about the first time he met Beatles bandmate John Lennon, admitting he looks back “like a fan”.

McCartney recounted the day on 6 July, 1957, when he was introduced to Lennon, then aged 16, in Liverpool.

He said: “I look back on it now like a fan, how lucky was I to meet this strange teddy boy off the bus, who played music like I did and we get together and boy, we complemented each other!”

Sir Paul McCartney admitted not all the songs he wrote with John Lennon were good.