The ageless Ringo Starr reflects on what keeps him going 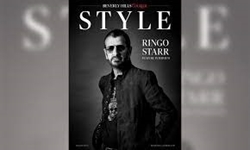 trange to think about it now, but when Ringo Starr launched Ringo and His All-Starr Band in 1989, he hadn’t been a touring musician since 1966.

The drummer had been in this really good band that only toured for four years before deciding it wasn’t for them and that they were just going to make records.

They were called the Beatles, and it turned out to be a pretty good move because the very next year, they released “Sgt. Pepper’s Lonely Hearts Club Band,” which some contend is the greatest album of all time.

After the breakup of the Beatles in April 1970, Ringo had about four good musical years during which he played on solo albums by John Lennon and George Harrison, performed at the Concert for Bangladesh, released two successful albums of his own – 1973’s “Ringo” and 1974’s “Goodnight Vienna” – and scored five top 20 singles: “It Don’t Come Easy,” “Back Off Boogaloo,” “Photograph,” “You’re Sixteen” and “Oh My My.”