'The Beatles: Get Back' Captures the Astonishing Moment When George Quit 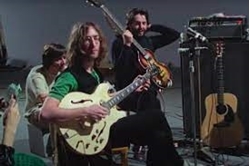 Fans may have heard about the fateful moment where George Harrison quit The Beatles for several days in 1969 before. But, despite the fact that Harrison’s walkout was captured on film by Let It Be director Michael Lindsay-Hogg, almost no one has seen the footage—until now. The Beatles: Get Back Part 1, the first of a three-part docuseries from Peter Jackson that is now streaming on Disney+, concludes with what may have been one of the Fab Four’s most dramatic moments.

The scene comes at the very end of Part 1, during The Beatles’ seventh day rehearsing at Twickenham. The band is under incredible pressure to write a new album, record it, and rehearse it for a live show in just 22 days’ time, and tensions are running high. The band is rehearsing their new song, “Get Back,” and Paul McCartney is offering Harrison some direction.