The Beatles Girl Who Really 'Came in Through the Bathroom Window' 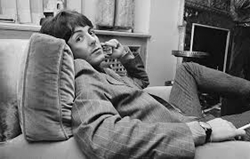 If you’re a Beatles fan who’s curious about what the Fab Four had on their mind for any particular song, that information is often available. For example, George Harrison spoke of writing “Savoy Truffle” for his friend Eric Clapton (who had quite the sweet tooth).

John Lennon also wasn’t shy about revealing where he’d gotten ideas for his songs. Take the landmark “In My Life” from Rubber Soul. On that track, John was responding to a journalist who asked why John didn’t include memories from his life in his lyrics.

Paul McCartney has also been willing to talk about the inspiration for his tunes. On “Helter Skelter,” for example, Paul wanted to make a hard-rocking song and simply added lyrics referencing an English fairground ride.

When it came to “She Came in Through the Bathroom Window,” John thought Paul had written the track about his first wife, Linda. However, it seems Paul wrote the song about a fan who broke into his home.