The Beatles Songs: 'Here There and Everywhere' Reminds Paul McCartney of a Cole Porter Classic 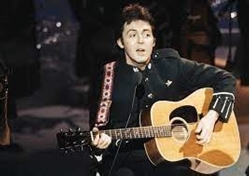 For many Beatles fans, Paul McCartney may be one of the greatest songwriters of all time. His and John Lennon’s Beatles songs dominated the band’s catalog. Then McCartney continued writing songs for his subsequent bands. McCartney himself looks back on other songwriters, like Cole Porter, whose writing inspired “Here, There and Everywhere.”McCartney was a guest on the Fresh Air podcast on Nov. 3. He was there to discuss his book, Paul McCartney: The Lyrics, a compendium of all his lyrics from the Beatles songs and beyond. It was also just before The Beatles: Get Back premiered on Disney+. Host Terry Gross followed up on something he wrote about “Here, There and Everywhere” and McCartney explained.