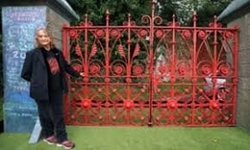 “Let me take you down, ’cause I’m going to Strawberry Fields” urged John Lennon in 1967. Now, for the first time, everyone will be able to walk in his footsteps, when the gardens immortalised in the classic Beatles song are opened to the public on 14 September, alongside a new visitors’ centre, cafe and shop.

Housed in a sleek, modern, light-filled building, it is a stark contrast to the original Gothic mansion that stood there when Lennon was a young boy and would bunk over the wall to climb trees and play hide-and-seek in its garden. Built in 1878 for a shipping magnate in the wealthy Liverpool suburb of Woolton (the family of prime minister William Gladstone lived nearby, in another long-gone pile) it was bought by the Salvation Army in 1934 and turned into a children’s home.

Lennon lived round the corner with his Uncle George and Aunt Mimi, and as well as sneaking into the garden with friends, he loved the summer fete held at Strawberry Field (in the singular, Lennon added the “s”). His aunt once recalled: “As soon as we could hear the Salvation Army band starting, John would jump up and down shouting, ‘Mimi, come on. We’re going to be late!’”