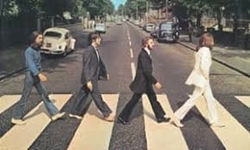 The Beatles album Abbey Road has reached the top of the UK album charts for the second time – 49 years and 252 days after it was first at No 1.

A deluxe reissue of the album was released to mark its 50th anniversary, though it may struggle to match the 17-week run the original release had at No 1.

Paul McCartney hailed the news. “It’s hard to believe that Abbey Road still holds up after all these years,” he said. “But then again, it’s a bloody cool album.”

The artist knocked off top spot by the Beatles is one the band have heavily influenced: Liam Gallagher, with his second solo album Why Me? Why Not. Back up four places to No 3 is Lewis Capaldi, whose debut album Divinely Uninspired to a Hellish Extent was named this week as the year’s biggest-selling so far at 423,000 copies. At No 4 is the south London rap group D-Block Europe, scoring their highest chart placing yet with their 28-track mixtape PTSD.