'The Beatles': Why George Harrison Would Sometimes Switch Guitars Partway Through ... 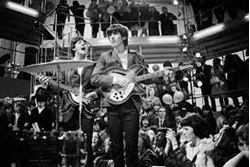 If you were lucky enough to ever see The Beatles play, and the band performed “If I Fell,” you might have noticed George Harrison switching between two guitars. During an interview with journalist Larry Kane (who toured with the band when they did their American tours in 1964 and 1965), Harrison explained the reason why he was “always swapping ’round.” He also spoke about staying true to The Beatles’ sound when performing live and his songwriting aspirations.

Kane traveled around with the band during their first two American tours. He rode in the same planes as them, stayed in the same hotels, and tried to get in questions whenever he could. During one of those interviews, he asked Harrison if The Beatles ever had any trouble replicating their sound onstage.