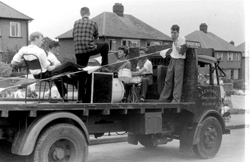 The Cavern isn’t the only 60th anniversary taking place in Liverpool this year. On July 6, it will be 60 years to the day that John Lennon was introduced to Paul McCartney at the Woolton church fete. The 16-year-old Lennon was playing at the summer event with his group The Quarrymen, a line-up of school friends from the near by Quarry Bank High School.

On banjo was Rod Davis, whose dad took one of the few images of that day – that of the Quarrymen’s float, with Lennon and the rest of the group on board.

Rod returned to the city this week to play with fellow Quarrymen at the Cavern’s 60th birthday celebrations.

And he took the time to look back seven decades to the group’s teenage years, and the day that would go down in 20th century music history.