The Elvis Song The Beatles Hated: 'The Song's a Load of Rubbish' 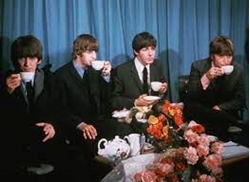 Elvis Presley and The Beatles were some of the biggest stars of their time. But they had an interesting relationship. In 1963, the English rock band was asked on Juke Box Jury their thoughts on Presley’s “Kiss Me Quick.” Nobody was a fan. Here’s what John Lennon, Paul McCartney, George Harrison, and Ringo Starr had to say, and more on their relationship with the King.

Presley first released “Kiss Me Quick” in 1962 on Pot Luck with Elvis. Then, the following year, it was released in the UK as a single (it came to the U.S. in 1964). When The Beatles were on Juke Box Jury, they were asked what they thought of the song.

“The only thing I don’t like about Elvis is the songs,” said Paul McCartney, as recorded in the book George Harrison on George Harrison. “You know, I love his voice. I used to love all the records like ‘Blue Suede Shoes’ and ‘Heartbreak Hotel’ — lovely. But I don’t like the songs now. And ‘Kiss Me Quick,’ it sounds like Blackpool on a sunny day.”