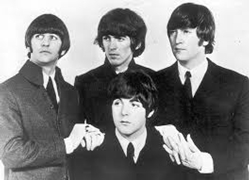 They developed into the Fab Four; the most famous group in pop music history.

But were you aware that John Lennon, Paul McCartney and George Harrison – minus Ringo Starr – once toured the north east of Scotland as a backing group and were called The Silver Beetles?

Or that, during their visit, McCartney was known as Paul Ramon and Lennon had the words Long John appended to his name?

This was long before the days of the Fab Four, George Martin, and Sergeant Pepper, as the Liverpool group took the world by storm.

Instead, in the spring of 1960, the three youngsters backed singer Johnny Gentle on a series of gigs in Inverness, Fraserburgh, Keith, Forres, Nairn and Peterhead.

The gigs were staged at such venues as the Northern Meeting Ballroom in Inverness, Dalrymple Hall in Fraserburgh and The Rescue Hall in Peterhead, between May 20 and May 28. Some of the concerts were well-attended, but others attracted barely any audience at all.

And Lennon and McCartney returned home to Liverpool after losing money on the trip.