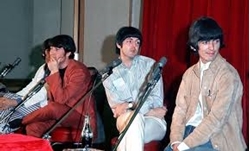 By early 1968, The Beatles had already made most of their explorations into psychedelic music. Though Yellow Submarine was still to come, “Strawberry Fields Forever,” “Blue Jay Way,” and “I Am the Walrus” were in the past.

After the Magical Mystery Tour film flopped, The Beatles had an urge to get to back to their rock ‘n’ roll roots. The music that would come on The White Album definitely reflects that change in direction. That album, heavy on guitars and piano, featured songs mostly written in India.

From mid-February through March of ’68, all four Beatles spent time practicing transcendental meditation with the Maharishi in Rishikesh. But before they left England, they recorded a single to tide over their fans. That song, written by Paul McCartney, was “Lady Madonna.”

When the band went to record a promotional film (i.e., a video) for “Lady Madonna,” they decided to record a new song by John Lennon instead. That track turned out so well John campaigned for it to go out as the single rather than “Lady Madonna.”