The Mistake The Beatles Purposely Left in the 'Abbey Road' Medley 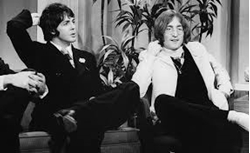 You’ll sometimes hear Beatles fans referring to a Fab Four record as “perfect.” Given the power of the songwriting, production, and individual performances, it’s not hard to understand what they mean. But from a technical standpoint, band’s recordings were far from perfect.

In some cases, The Beatles intentionally made a recording flawed. Geoff Emerick, the band’s longtime engineer, explained how it worked in the book Here, There and Everywhere. “When someone made a mistake and the others liked it, we’d often make it louder [during mixing] to accentuate it.”

On the Abbey Road album, you find an example of what Emerick was talking about on “Polythene Pam.” In the middle of that track, which was part of the Side Two medley, Paul McCartney made a mistake playing his bass part.