The Night the Rolling Stones Met the Beatles 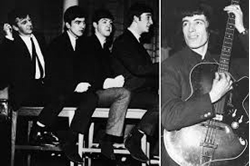 Former Rolling Stones bassist Bill Wyman recalled the moment when he looked up during an early performance and saw the Beatles in the audience.

The iconic meeting took place at the Crawdaddy Club in the Station Hotel in Richmond, England, on April 14, 1963. The Beatles had already logged two No.1 U.K. hits – “Please Please Me” and “From Me to You” – while the Stones were still 14 months away from their first visit to the top of the charts with “It’s All Over Now,” as Wyman told Uncle Joe Benson on the Ultimate Classic Rock Nights radio show.

“Halfway through the set we kind of glanced up, and there were four silhouetted leather-clad persons standing just in front of the bandstand in amongst all these kids who were all dancing and playing around,” he said, noting that John Lennon, Paul McCartney, George Harrison and Ringo Starr were “being totally ignored by the audience.” “I turned round to Charlie [Watts], and I said, ‘It’s the Beatles!’ They’d had two or three big No. 1 hits and they were like the rave of England at that time.