The No. 1 Beatles Hit John Lennon Said He Wrote 'in My Fat Elvis Period' 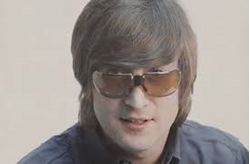 John Lennon’s wit was something special. Whether dropping a one-liner in an interview or rhyming “cigarette” with “stupid get” (at Sir Walter Raleigh’s expense), John had a way of entertaining himself and his audience whenever he spoke.

Of course, John could get himself into trouble when he got on a roll (see: “bigger than Jesus”). But when he kept his focus on the secular, everybody won. In his last major interview, John was at his wittiest when savaging Beatles songs and otherwise describing his life in music.

At several points, John became the target of his own ridicule, as when describing the period that drove him to write “Help!” While taking the interviewer through the very real pain he felt during those months, John couldn’t resist a one-liner. “It was my fat Elvis period,” he said.