The surprise discovery that brought The Beatles back together 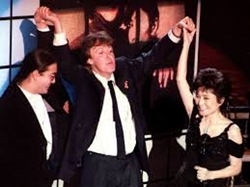 Paul McCartney was an ex-Beatle on a mission as he arrived at the Waldorf Astoria hotel in Midtown Manhattan on 19 January 1994. He was there for the induction into the Rock and Roll Hall of Fame of John Lennon, his friend, collaborator and occasional rival.

Also at the ceremony was Lennon’s widow Yoko Ono, who would appear that night onstage alongside McCartney. In Beatles lore, the two were sworn enemies (an overstatement, though McCartney had admitted to feeling “threatened” by Ono when she started turning up to band recording sessions with Lennon). So it was seen as hugely significant that they would come together to honour a fallen husband and comrade. This was the hell-freezes-over moment many “Fab” fanatics had never imagined they would witness.

“I wish John could have seen this,” Ono said as she and McCartney publicly patched up whatever differences they had. Later that evening, back at Yoko’s residence, she and her 19-year-old son, Sean, went further with the reconciliation by handing over to McCartney and his wife Linda several battered recordings, dating from the late 1970s. And with that, began the next chapter in the story of The Beatles.