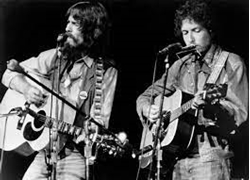 George Harrison was Bob Dylan’s No. 1 fan. The ex-Beatle had many friends, from all walks of life, including Monty Python comedian Eric Idle, Formula 1 race car driver Jackie Stewart, and his musical and spiritual guru Ravi Shankar. However, Dylan was one of George’s oldest friends. They first met in 1964, and Dylan gave The Beatles their first joint.

They collaborated through the years, most notably on George’s debut solo album All Things Must Pass and later with the Traveling Wilburys. But their friendship went deeper than that.
George met Tom Petty in 1974. By then, George and Dylan had already established a tight bond, and Petty instantly recognized it. Still, Petty was welcomed as an equal and later joined George and Dylan in the Traveling Wilburys. A year after George died in 2001, Petty reflected on George’s relationship with Dylan during an interview with Rolling Stone. Petty said that George often quoted Dylan “like people quote Scripture.”