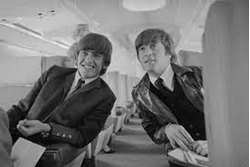 George Harrison and John Lennon didn’t always have the best relationship. Initially, John thought George was too young to join The Beatles and treated him like a little brother. George held his own against John’s early treatment, but he didn’t stop viewing John as his older brother. He admired everything that John did. Some of George’s closest friends saw how much he wanted John’s acceptance. In Martin Scorsese’s documentary, George Harrison: Living in the Material World, George explained that he thought John was initially embarrassed having him in The Beatles (then the Quarrymen) because he was so young.