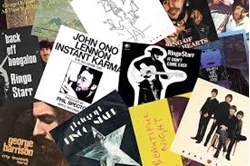 Ringo Starr's role as a glue guy in the Beatles was confirmed once they began solo careers. Long after the group split, his individual sessions drew far-flung former members back together once more.

At least half the Beatles are present for many of these tracks, and in several instances three of the four ex-bandmates appear. The most famous are the so-called "Three-tles" reunion songs in the '90s, as the others came together to complete a pair of the late Lennon's songs.

Other notable partial reunions date from just after the group's 1970 breakup through modern-era collaborations as recent as the '10s. Several even include classic-era producer George Martin.