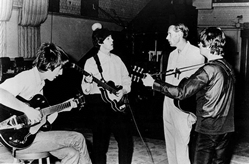 He was the fifth Beatle, but you’d never know it. He was a Knight of the British Empire, but you probably didn’t know that either. He was Sir George Martin and he worked on over 400 recordings by artists from the Beatles to Celine Dion.

Join Tom Engelmann to enjoy the recordings of this under-appreciated producer and arranger on another edition of “Unsung Heroes, Influential but Overlooked Masters of Modern Music." Tune in on your radio or online, Monday, July 30 at 8 p.m. on Montana Public Radio.