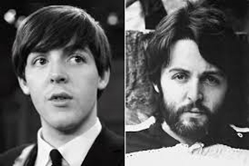 Despite being one of the most well-known singers of his generation, a select few Beatles fans believe Macca died way back in 1966.

The legend goes that McCartney was killed in a car crash and was replaced by a lookalike.

The band – conspiracists claim – then left hidden clues in their albums which revealed the truth.

Yesterday And Today is one such album that sparked a frenzy and the conspiracy surrounding it has re-emerged ahead of an auction of a £125k copy on May 9.