When the Beatles' 'Hey Jude' Started a Prison Riot 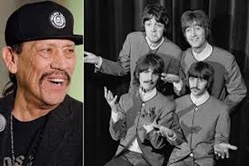 He was serving 18 months in solitary confinement at the time, having built a criminal record of drug and armed-robbery offenses. Even though those days are far behind him, he can’t forget the moment one of his favorite songs caused an episode of emotion-driven violence.

“It’s always real noisy and chaotic in the hole, and this song comes on and you can barely hear it from the officer’s radio,” Trejo told NME in a new interview.. “And the hole got quiet and quiet and quiet. It’s not good when the hole is quiet. And then, ‘Judy Judy Judy Judy Judyyyyyy!’ Sinks were broken! Toilets were flooded! We went just totally insane! ... That song was so beautiful it was worth a riot.”

In 2016, he recounted a similar version of the story, telling Metal Hammer that Abbey Road was the record from his collection he wished he’d helped make. “It’s awesome,” Trejo said. “When I went to England, I walked down Abbey Road. I had to do it!”