Which Beatle Played the Best Guitar Solo on 'The End'? 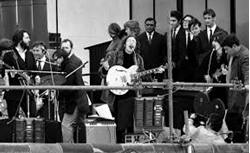 By 1968, The Beatles featured three premiere songwriters vying for space on the band’s records. If you didn’t deliver your best work, there was a good chance your song would get bumped. That happened to George Harrison on Sgt. Pepper a year earlier; then it happened again on The White Album.

Indeed, even on a double album, The Beatles didn’t have room for George’s “Sour Milk Sea” or “Not Guilty.” So it’s safe to say there was some stiff competition at this point in the band’s run. That’s going to happen with Paul McCartney and John Lennon writing songs for the same records.

But the competition didn’t end with songwriting. Since these three Beatles all played guitar, bass, and keyboard, you also had jockeying for who might play what on a particular track. Hence Paul taking a guitar solo on “Taxman” and John doing the same on “Get Back.”