Why Did The Beatles Ditch Their First Drummer for Ringo? 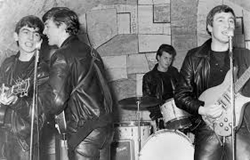 Looking back, it’s hard to imagine The Beatles without Ringo Starr. For all the knocks he’s taken over the years, most would agree now that Ringo was the ideal drummer for the band. It has as much to do with his personality (wry, happy) as it does with his talent (steady, always tasteful).

But that certainly wasn’t the case in 1962. Then (and for the previous two years), Pete Best played drums for the group. He’d joined the band at the invitation of Paul McCartney, just before The Beatles went to play Hamburg for the first time.

In August ’62, just as the band was about to get its first real recording contract, Beatles manager Brian Epstein called Best into his Liverpool office and fired him. Considering an angry fan head-butted George Harrison over the move, it’s fair to say not everyone agreed with the decision.

Contrary to some stories that went out over the years, the move didn’t come because Best’s hair didn’t fit in or he was so pretty he made the other Beatles jealous. Bringing Ringo aboard was mainly about business.