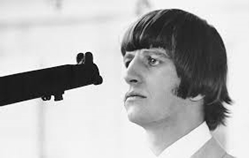 If The Beatles were down one band member, it wasn’t the end of the world. In most cases, Paul McCartney would pick up the slack and the recording would go on. A famous example came in 1969, when John Lennon asked Paul to be his backing band on “The Ballad of John and Yoko.”

That track went all the way to No. 1 on the UK charts. By then, Paul had a lot of practice sitting in for Ringo. During the contentious White Album sessions of ’68, Paul played drums on four tracks, including “Dear Prudence” and “Martha My Dear.”

The band needed a replacement for Ringo because the drummer split down in August after he’d had enough of the bad vibes in the studio. Whether waiting for hours for someone to show up or having Paul criticize his playing, Ringo’d had his fill.

Instead of shutting the White Album sessions down for a while, The Beatles decided to keep going. And the three remaining band members all took a crack at drums on “Back in the USSR.”