Why George Harrison Thought Dick Clark Was a Greedy Vulture: 'I'd Be Embarrassed if I Was Him' 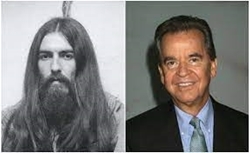 George Harrison was not a fan of American radio and television personality Dick Clark. In 1979, the American Bandstand host and “America’s oldest teenager” produced a biographical film called Birth of The Beatles. Clark needed Beatles songs and footage to complete the project, and George didn’t like it.