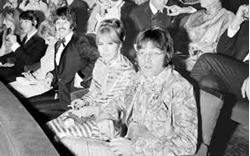 While The Beatles had several peaks together collectively, the band members didn’t always see it that way. Take Sgt. Pepper’s Lonely Hearts Club Band, which is often called the greatest album of all time. Neither George Harrison nor Ringo Starr had a great time making that record.

George described being bored by the “assembly process” the band went through during the Sgt. Pepper sessions. For his part, Ringo wasn’t thrilled about all the sitting-around the band did making the album. (He compared it to being a session musician.)

On “She’s Leaving Home,” Ringo didn’t even have a drum part to play. Overall, Sgt. Pepper was very much a Paul McCartney project. That hints at another reason Ringo didn’t enjoy making the album.

In an interview published in the Anthology project, Ringo said he generally preferred playing songs John Lennon wrote to those penned by Paul. It was a matter of the songwriters’ individual styles.