Why The Beatles Didn't Think 'Sgt. Pepper's' Was Their Best Work 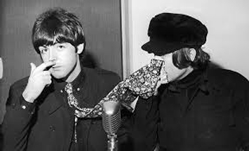 When music writers and critics decide to round up the best Beatles album, you find a familiar record at the top: Sgt. Pepper’s Lonely Hearts Club Band. Rolling Stone not only named it the best Fab Four album; the magazine ranked it No. 1 on its list of “500 Greatest Albums of All Time” in 2012.

There’s more where that came from. You’ll hear the oft-repeated line Ringo Starr delivered for the Anthology project. (He called it “our grandest endeavor.”) To Paul McCartney, whose work dominated the album, it was an album “in the spirit of the age,” “a huge advance” for the group, something the band did as “spokesmen” for their generation.

Another quote from Paul could hint at one reasons behind his personal regard for the album. “If records had a director within a band, I sort of directed ‘Pepper,’” he said in 1990. (At other points, Ringo has cited the much heavier 1966’s “Rain” and 1968’s “Yer Blues” as his favorite tracks.)