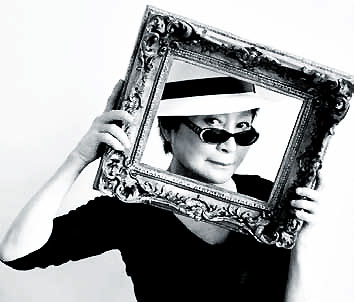 A few months after first meeting her, John Lennon tried to commission Yoko Ono to build a "light house" in his garden. "Oh, that was conceptual," Ono demurred, referring to a structure she'd built in her imagination with beams of refracted light emanating from hypothetical prisms.

In the 47 years that have ensued since that conversation, Ono has constructed a legacy as the world's penultimate conceptual artist.
If Ono had her druthers, people entering the Bob Rauschenberg Gallery on Friday, January 24 to see Yoko Ono: Imagine Peace (YOIP) would be handed a set of instructions and asked to fill the exhibition hall's blank walls with magnificent artworks projected from their individual and collective imaginations. YOIP does not go quite that far, but there will be no viewers or spectators at the exhibit. Everyone who passes through the Rauschenberg Gallery's doors will be magically converted into an active collaborator the instant they are handed an Onochord and encounter works such as Wish Tree, Map Piece and Play It By Trust.

Read more on this story...