UK John Lennon Documentary to Premiere on US Television Next Month - Thursday, May 24, 2012

A recent John Lennon documentary will get its U.S. premiere on the BBC America channel next month as part of a block of Beatles-related programming timed to coincide with Paul McCartney‘s 70th birthday. Debuting on June 19 at 9 p.m. ET, Discovering Lennon takes a look at the lasting impact the singer/guitarist’s music and ideas have had.  The film will feature interviews with a number of present-day political and pop-culture figures.

George Harrison track could be finished by Paul McCartney - Thursday, May 24, 2012

An unfinished song by George Harrison could be completed by his former Beatles bandmate Paul McCartney.

She oversaw the creation of Early Takes, an details

Graphic Books Best Sellers: The Relationship of an Artist and an Original Beatle - Thursday, May 24, 2012 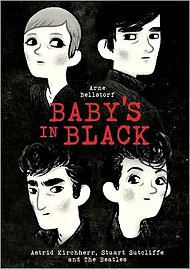 New to our graphic books hardcover best-seller list this week, at No. 7, is “Baby’s In Black,” which chronicles the relationship between the artist Astrid Kirchherr and Stuart Sutcliffe, the original bass player of The Beatles, who met in Hamburg during the earliest days of the band. The graphic novel, by the cartoonist Arne Bellstorf, is already a success in Germany, and does a wonderful job of capturing the small moments of everyday life. It feels authentic, no doubt thanks to the extensive input from Ms. Kirchherr. The illustrations, in black and white with sketchy gray tones, are, for the most part, warm and inviting. “Baby’s In Black” has a couple of drawbacks: all of Mr. Bellstorf’s faces have small swirls of gray on their cheeks. It’s easy enough to get used to, I suppose, but this graphic tic often makes the characters look dirty (is that details

George Harrison's Wife and Giles Martin Discuss Scorsese Documentary, Bob Dylan and Being 'Stifled' by the Beatles - Wednesday, May 02, 2012

Five days after his scheduled performance in Guadalajara, Sir Paul McCartney will play a massive free concert in Mexico City on May 10.

The author of classics such as “Hey Jude” and “Let It Be” will perform before around 200,000 fans in the capital’s iconic Zocalo.

Fans may have to queue for hours to gain a decent vantage point of the former Beatle, but they will not have to pay for a ticket. Sponsors Coca-Cola, Nextel, AeroMexico and Hewlett Packard will cover the costs, revealed Marcelo Ebrard, details

Paul McCartney stunned the studio audience — and by the looks of it, possibly actor Alec Baldwin — by making a surprise walk-on appearance during a live episode of NBC’s ’30 Rock.’

Officials in Colombia took no risks when SIR PAUL McCARTNEY landed in the country last week (ends22Apr12) - 1,400 police officers were designated to help protect THE BEATLES legend.
The rocker headed to South America as part of his On The Run tour earlier this month (Apr12), and jetted into Colombia last Thursday to play a sold-out gig at the El Campin Stadium in Bogota.
And authorities ensured McCartney would come to no harm in the city - which has one of the highest crime rates in the world - by ordering a "ring of steel" to surround the star at all times during his two-day visit, according to the Daily Telegraph.
A source tells the newspaper, "From the moment Paul's plane landed to the moment he left, officials designated 1,400 police for the whole two days.
"It is a massive secu details
Sir Paul McCartney signs fan’s neck for tattoo - Tuesday, May 01, 2012

SIR Paul McCartney proved to be a pain in the neck for a female fan as she took away a permanent reminder of her encounter with the superstar.

The 69-year-old former Beatle pulled a young woman from the crowd as he performed at a huge stadium concert in Recife, Brazil, and she asked him to sign her neck.

Natalia Lobo, 21, then rushed off to a tattoo parlour to have his autograph inked on her skin forever.

DHAKA, Bangladesh — Hidden from view along a side street in this dusty, traffic-choked metropolis of 12 million people, Dhaka’s Liberation War Museum seems an unlikely place to honor the memory of George Harrison.

Yet here, in a second-floor gallery crammed with glass cases full of aging rifles, machine guns, spears, bayonets and other weapons of war is a bronze plaque dedicated to the “quiet Beatle” who preached love and compassion.

A former Beatle and a former Eurythmic are making a musical with Paramount. The studio has picked up Hole In The Fence from Ringo Starr and Dave Stewart. The coming-of-age drama is about a group of kids who form a band to escape their depressing mining town.