Today, at their Sydney hotel, the Beatles recorded a telephone conversation for broadcast a week later (Saturday, June 27, 5:00 to 6:30 pm) back in Britain on the BBC Light Programme show Roundabout, chatting to the programme's compere Colin Hamilton. The interview was split into three sections for the transmission, totalling five minutes.

Tonight was the last of three nights at the Stadium in Sydney.

The second day of three nights at the Stadium in Sydney.

The Beatles returned to Sydney from Melbourne for six shows over three nights, with 12,000 fans - the biggest pop concert audience in Sydney at that time, packing into the Stadium on each occasion.

Typically, newsreel cameras were allowed to film a part of one of the Sydney performances. Not especially typical, however, was the production of a stand-alone production from this footage, Beatles at the Stadium, a "Cinesound exclusive!" which opened on June 25th at Wyngard & State Theatrettes in Sydney. Advertisements for the film boasted "Hear them sing excerpts from their five greatest hits, including "She Loves You", "Love Me Do", "I Want To Hold Your Hand" and more! The Beatles didn't perform "Love Me Do" in Sydney nor at any other venue on this tour.

The Beatles’ final two shows in Melbourne, Australia took place on this day.

In the afternoon George Harrison went driving in an MG in the Dandenong Mountains with tour organiser Lloyd Ravenscroft. Concerned with more important matters, John Lennon, Paul McCartney and Ringo Starr had their hair cut in their hotel, the Southern Cross.

This was The Beatles’ last of three consecutive nights of shows in the city’s Festival Hall, Each night they gave two concerts, which were enjoyed by a total of 45,000 people.

Cameras from the Australian Channel 9 recorded the sixth and final show of the Melbourne leg of the world tour. It was screened on 1 July 1964 as an hour-long special, The Beatles Sing For Shell, named after the oil company which sponsored the broadcast.

Nine of The Beatles’ Melbourne performances were included in the show: I Saw Her Standing There, You Can’t Do That, All My Loving, She Loves You, Till There Was You, Roll Over Beethoven, Can’t Buy Me Love, Twist And Shout and Long Tall Sally. During Long Tall Sally, a male audience member rushed onto the stage to shake John Lennon’s hand.

On The Beatles’ second night of performances in Melbourne, Australia, they gave two concerts at the city’s Festival Hall.

Their repertoire during this part of the world tour consisted of 10 songs: I Saw Her Standing There, I Want To Hold Your Hand, You Can’t Do That, All My Loving, She Loves You, Till There Was You, Roll Over Beethoven, Can’t Buy Me Love, This Boy and Long Tall Sally.

At 8am on the morning of 15 June 1964, Jimmie Nicol left the Southern Cross Hotel on Bourke Street, Melbourne. Accompanied by Brian Epstein, he was driven to the airport where he was given a final agreed fee of £500, as well as a gold watch with the engraving: “To Jimmy, with appreciation and gratitude – Brian Epstein and The Beatles.”

Nicol didn’t say goodbye to The Beatles; they were sleeping off the previous night’s party, and he felt he shouldn’t disturb them. The group was celebrating their reunion with Ringo Starr, who had missed the early part of their world tour after being struck down by acute tonsillitis and pharyngitis. 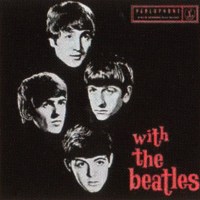 In the afternoon EMI held a reception for The Beatles at the hotel. However, the event turned sour when John Lennon protested at label executives upon finding out they had released With The Beatles with different artwork.

Australian trade union rules meant that all album artwork had to be re-photographed and altered; it was felt that Robert Freeman’s iconic image would lose details, so a replacement was designed. Lennon, however, was unwilling to tolerate such a reason.

That night, and for the two subsequent nights, The Beatles performed two shows at the Festival Hall in Melbourne. The six concerts were watched by a total of 45,000 people.

After this first night’s shows, The Beatles attended a private party held in the city’s affluent suburb Toorak.

Ringo rejoined the Beatles in Melbourne on June 14th 1964 following his ten day hospital recovery from accute tonsilitis. As Ringo Starr and Brian Epstein arrived in Melbourne, they witnessed the beginnings of the incredible gathering that would greet the other Beatles arrival later that afternoon. The car carrying Ringo and Brian pulled up to the main public entrance where 3,000 fans had already gathered.

Dick Lean, managing director of Stadiums Limited, would later remember about Ringo's arrival: "The police inspector decided to put Ringo on his shoulders and make a dash for the entrance. It seemed like a good idea until our PR lady began waving to the crowd, then tripped and fell down right in front of this piggy back. (The inspector) stepped on her and down came Ringo, right into the grasping claws of hundreds of kids. When we finally pulled him out and got him inside... his first words were "Give us a drink. That was the roughest ride I've ever had!"

As the rest of the group arrived, the number of fans had grown to 20,000 and the police to 400, with literally thousands of fists banging on the glass panels that comprised the front of the Southern Cross Hotel. John, Paul, George and Jimmy used a more secretive entrance into the hotel, and within minutes they and Ringo were rushed to the first-floor balcony, in an attempt to draw the fans away from the glass doors of the hotel. John was later reported as calling it "The greatest reception we have received anywhere in the world."

Jimmy Nicol departed for London the next day. Once back home, with all the newfound attention on him, he was automatically set for television appearances and interviews. However-bright the spotlight, his 1964 appearances with the Beatles would not bring lasting stardom to his future musical career.

In Adelaide at Centennial Hall, the group gave their first four shows in Australia, over two nights, the repertoire identical to that performed in Denmark, the Netherlands and Hong Kong. Fifty thousand applications arrived for 12,000 seats here.

In exchange for a handsome fee, NEMS permitted one of the two shows on the 12th to be recorded for radio transmission. The broadcast, titled simply Beatles Show and sponsored by the manufactureres of Surf Detergent, went out the following Monday evening, on June 15th.

The day after they landed on Australian soil, The Beatles flew from Sydney to Adelaide in a chartered Ansett ANA jet, arriving at 11.57am.

An estimated 200,000 people lined the 10-mile route between Adelaide Airport and the city centre in the hope of seeing The Beatles’ motorcade. More than 30,000 surrounded the Town Hall, where they met the city’s mayor, James Campbell Irwin, along with council members and their families.

The Beatles were given toy koala bears. John Lennon told the reception, “Wherever we go, anywhere in the world, this reception which Adelaide has given us will stick in our memories.”

The group was shadowed by local DJ Bob Francis from 5DN, who interviewed them in a range of locations including the Town Hall balcony. Francis also booked the suite next to theirs at the Southern Australia Hotel, from where he gave listeners hourly updates.Three hundred thousand people welcomed us to Adelaide. It was like a heroes’ welcome. George waved too. That was the kind of place where we would go to the town hall and they would all be there in the centre of the city. If it had happened suddenly, overnight, it might have gone to our heads; but we had come up bit by bit, so it didn’t (not too much). We were just very pleased that everyone had turned out.We were still close enough to our Liverpool roots to know how it would feel, and what it would mean, if we had showed up in the middle of town to see a group; so we could feel it in their spirit. I think we quite enjoyed it all. It can get a bit wearing, but it certainly wasn’t then.We came in from the airport – it was the same in Liverpool for the première of a A Hard Day’s Night, with the whole city centre full of people – and the crowds were lining the route and we were giving them the thumbs up. And then we went to the Adelaide town hall with the Lord Mayor there, and gave the thumbs up again. In Liverpool it was OK, because everyone understands the thumbs up – but in Australia it’s a dirty sign.

On June 11th 1964, the three Beatles and Jimmy Nicol traveled overnight from Hong Kong to Sydney, arriving down under at around 7:30am. Despite the heavy rain and winds, the Beatles agreed to be paraded on a flatbed truck so that their fans waiting at the airport would not be disappointed. The Beatles waved at the huge crowd in the early morning storm, becoming literally soaked. As the Beatles would later learn, caused by the downpour, the caped coats which they had purchased in Hong Kong unfortunately stained their bodies a pale blue. Luckily this discoloration hid underneath their clothing while in public.

Dick Lean, managing director of Stadiums Limited, would later remember about the Sydney press conference: "They were just brilliant, under any circumstance. They handled the press with a sharp reparte that we'd just never seen before." The Beatles had once again charmed the all-important press. An editorial in Sydney's Sun newspaper proclaimed: "Their press conference showed that teenagers are not necessarily fools when it comes to picking winners. One cannot 'ready' a press conference. Questions are asked and answered off the cuff very quickly... they showed considerable insight into the secret of their own success."

The following press conference was held at the Sheraton Hotel in Sydney, marking their June 11th arrival down under, with Jimmy Nicol.