The single "If I Fell/Tell Me Why" was released in Europe as Parlophone DP 562 (a few hundred copies were accidentally released in the UK today - 50 years ago. January 28, 1965 - John and Cynthia Lennon outside the Palace Hotel in St. Moritz, Switzerland where they were enjoying a winter ski holiday with George Martin and Judy Lockhart-Smith.

“Norwegian Wood” began to be written by John Lennon while on a skiing vacation in St. Moritz in the Swiss Alps with his wife Cynthia and producer George Martin and his wife between January 25th and February 7th, 1965.  “It was during this time that John was writing songs for ‘Rubber Soul,’” 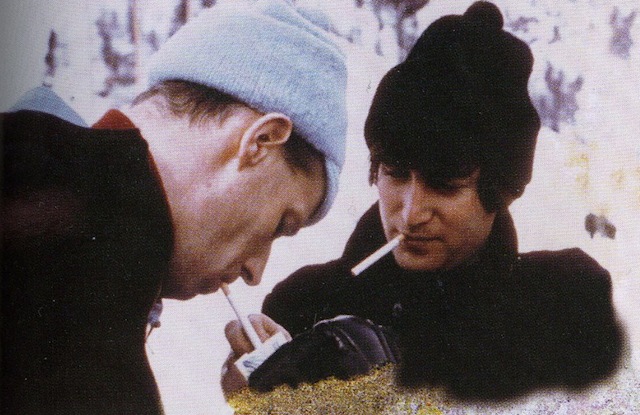 George Martin recalls, “and one of the songs he composed in the hotel bedroom, while we were gathered round, nursing my broken foot, was a little ditty he would play to me on his acoustic guitar.  He’d say, ‘What do you think of this one?’  It had a slightly sick lyric, which was very apt to me nursing my injured toe.  The song was ‘Norwegian Wood.’”

The cartoon "The Flinstones" had an episode 50 years ago today called "The Hatrocks and the Gruesomes" which featured a band with the Beatles trademark mop-top hair that plays "bug music", a parody of the "Yeah, yeah, yeah" refrain from "She Loves You".