Nothing major to report for the Beatles today.

John Lennon evades a young fan who wants his yachting-style cap as a souvenir during the Beatles' concert in Rome on June 28,1965. 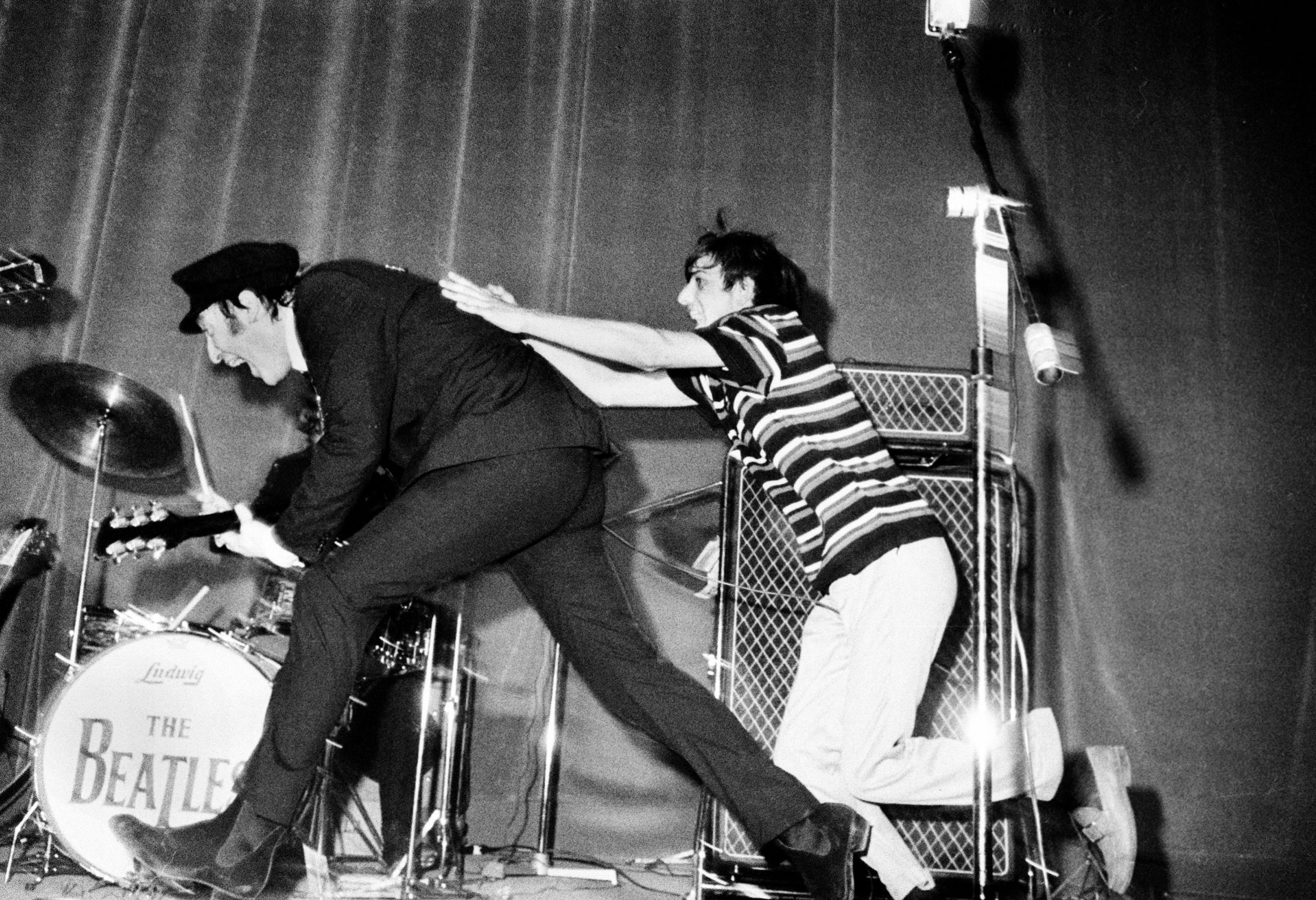 The Beatles performed two shows on this day at the Teatro Adriano in Piazza Cavour in Rome, and two more on the following day.  It was the group's only visit to the Italian capital.

The concerts took place on each of the days at 4.30pm and 9.30pm. Originally just this day's performances had been booked, but the next day's were added later on. Despite this, none of The Beatles' four Rome shows was more than half full.

Parts of both this day's performances, recorded by members of the audience, have been circulated on bootlegs, although the quality is less than perfect.

After the second show Paul McCartney met playwright Noël Coward, who had attended the concert. The encounter took place at the Parco dei Principi hotel.

Following their two concerts in Milan, The Beatles were driven in four cars to Genoa, Italy by the Alfa Romeo Racing Team.

The group performed 12 songs during both shows in Genoa: Twist And Shout, She's A Woman, I'm A Loser, Can't Buy Me Love, Baby's In Black, I Wanna Be Your Man, A Hard Day's Night, Everybody's Trying To Be My Baby, Rock And Roll Music, I Feel Fine, Ticket To Ride and Long Tall Sally.

The Beatles remained in Genoa for just a short time. Immediately after the second show they flew to Rome in a chartered aeroplane.

The Beatles, with Brian and Wendy Hanson, stay at a hotel in Geneva. 4.30pm, 9.30pm. Concerts at the Palazzo dello Sport, Geneva, Italy.

Mr. Quintieri, member of the Italian Parliament, in the Chamber of Deputies, asks the Minister of Finance if `appropriate measure has been taken to guarantee the payment of taxes on the fees paid to the Beatles and what was the amount declared and assessed.'

During their career The Beatles performed eight concerts in Italy, over four days during their European Tour in the summer of 1965. The Beatles played their first Italian show in Milan at the Velodromo Vigorelli.

The group performed two shows on this date, at 4.30pm and 9.30pm. The velodrome seated 22,000 people, although neither of the concerts was a sell-out: the afternoon performance was seen by 7,000, and the evening concert attracted 20,000.

Brian Epstein was not pleased at all the empty seats, particularly during the afternoon show when many of the fans were at school or work and only 7,000 people attended. The press suggested that a combination of high prices and a heat wave had kept the fans away.

The Beatles arrived for their concert at the Palais D'Hiver on June 22, 1965 in Lyon, France.

Following their two performances the previous day at the Palais des Sports in Paris, The Beatles had a rest day before travelling to Lyon for their next engagement.

It wasn't all rest, however - from inside their hotel, the George V, the group gave an interview to Chris Denning for Radio Luxembourg's weekly show 'The Beatles'. Denning invited them to dedicate songs: John Lennon's was for Harold Wilson; Paul McCartney's were for writers Bernard Levin, Donald Zec and Wolf Mankowitz; George Harrison dedicated a song to the miners of Scunthorpe, in reaction to Ringo Starr's dedication for the Liverpool dockers. Starr also dedicated tunes to writers Don Short and Judith Simons, and for their fan club secretary Freda Kelly.

In the evening The Beatles returned once again to the Castel nightclub on 15 Rue Princesse, where they had partied the night before.

The Beatles' set throughout the European tour comprised 12 songs: Twist and Shout, She's a Woman, I'm a Loser, Can't Buy Me Love, Baby's in Black, I Wanna Be Your Man, A Hard Day's Night, Everybody's Trying to be My Baby, Rock and Roll Music, I Feel Fine, Ticket To Ride and Long Tall Sally.