Back to Kingsway for a 7:00 to 12:00 pm session (George Martin still absent; the May 26th team operative again) in which George's lead vocal, John and Paul's backing vocal, additional percussion and handclaps were overdubbed onto a new reduction mixdown of "It's All Too Much". (This session was incorrectly reported in the Recording Sessions book as May 26th).

The Beatles attend a party at Brian Epstein’s country house

The Beatles masterpiece, “Sgt. Pepper’s Lonely Hearts Club Band” was released in the UK, one week before its American debut. The album took over 700 hours to record under the direction of George Martin and cost $75,000 to produce. A then state-of-the-art four track recorder was used to build each song layer by layer. The LP spent 22 weeks at the top of the UK albums chart and 15 weeks at number one in the US. The iconic album cover, depicting the band posing in front of a collage of celebrities and historical figures, was designed by English pop artists Peter Blake and Jann Haworth based on a sketch by Paul McCartney.

It’s All Too Much

All four members of The Beatles went to the Speakeasy in London on this day to watch new band Procol Harum perform.

The Speakeasy was a nightclub situated in the basement of 48 Margaret Street, W1. Managed by Roy Flinn and Mike Carey, it opened on 4 January 1967, and The Beatles often visited.

Procol Harum's debut single A Whiter Shade Of Pale was released on 12 May 1967. John Lennon, in particular, was a big fan of the song.

On May 22nd 1967 it was announced that The Beatles would represent the BBC (and ultimately England) in the World's first worldwide television satellite link-up, to take place on the 25th June. They would be shown working "live" on a new song.
At this time in May, the song hadn't even be written ... then just one month later a finished piece that encapsulated the Summer of Love, Flower Power, the entire period, and would be an anthem to the sixties.

First thing to note on the label, is the very first time George Martin received credit as the producer on a single. 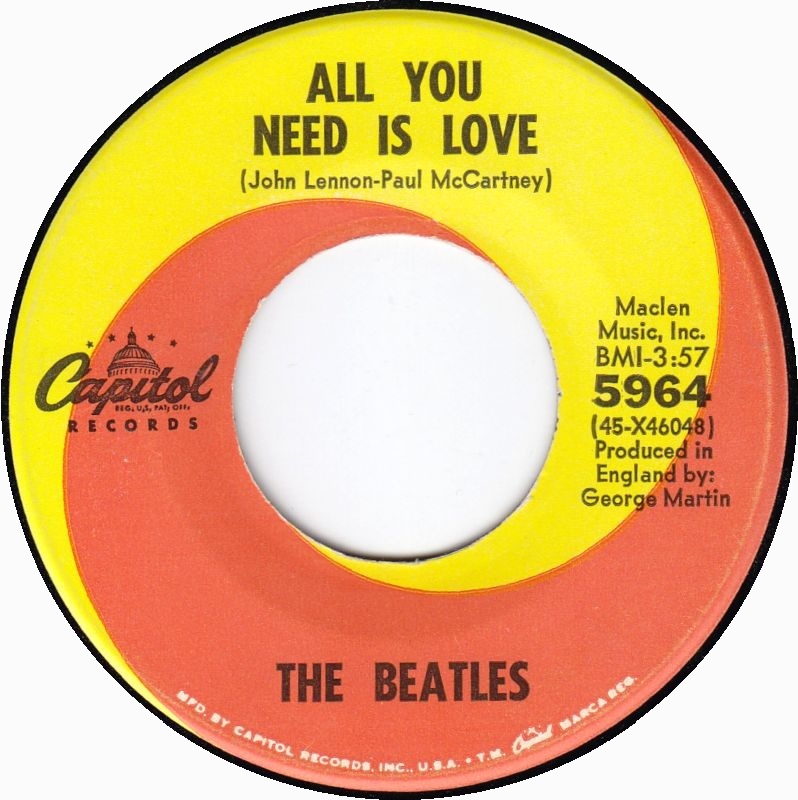