John Lennon and his wife Cynthia, meanwhile, spent the evening at a party held by record producer and songwriter Norman Newell.

Hmmmmnnnnn, Ringo is unaccounted for....

The Beatles enjoying their Christmas break.

The Beatles enjoying their Christmas break.

The Beatles are having a quiet day after the Christmas Rush

Paul McCartney has a moped accident in Liverpool

In what would become one of the key 'clues' in the "Paul is Dead myth, on this day Paul McCartney suffered a moped accident while visiting his family in Liverpool.

McCartney fell from his moped and chipped a front tooth. He also cut his lip and was left with a scar.

Also on the night time ride was Tara Browne, McCartney's friend. Browne was the Guinness heir whose death later inspired John Lennon to write the opening lines of A Day In The Life.

Paul McCartney "I had an accident when I came off a moped in Wirral, near Liverpool. I had a very good friend who lived in London called Tara Browne, a Guinness heir - a nice Irish guy, very sensitive bloke. I'd see him from time to time, and enjoyed being around him. He came up to visit me in Liverpool once when I was there seeing my dad and brother. I had a couple of mopeds on hire, so we hit upon the bright idea of going to my cousin Bett's house.

We were riding along on the mopeds. I was showing Tara the scenery. He was behind me, and it was an incredible full moon; it really was huge. I said something about the moon and he said 'yeah', and I suddenly had a freeze-frame image of myself at that angle to the ground when it's too late to pull back up again: I was still looking at the moon and then I looked at the ground, and it seemed to take a few minutes to think, 'Ah, too bad - I'm going to smack that pavement with my face!' Bang!

There I was, chipped tooth and all. it came through my lip and split it. But I got up and we went along to my cousin's house. When I said, 'Don't worry, Bett, but I've had a bit of an accident,' she thought I was joking. She creased up laughing at first, but then she went 'Holy...!' I'd really given my face a good old smack; it looked like I'd been in the ring with Tyson for a few rounds. So she rang a friend of hers who was a doctor.

He came round on the spot, took a needle out and, after great difficulty threading it, put it in the first half of the wound. He was shaking a bit, but got it all the way through, and then he said, ''Oh, the thread's just come out - I'll have to do it again!' No anaesthetic. I was standing there while he rethreaded it and pulled it through again.

It caught on with the guys in the group: if one of us did something like growing his hair long and we liked the idea, we'd all tend to do it. And then it became seen as a kind of revolutionary idea, that young men of our age definitely ought to grow a moustache! And it all fell in with the Sgt. Pepper thing, because he had a droopy moustache.

McCartney's chipped tooth and scar can be seen in the promotional videos for Paperback Writer and Rain, which were filmed in London in May 1966.

Later on........Brian Epstein said, "Last mid-December, Paul injured his lip and chipped his tooth in the moped accident. He honestly thought no one would notice the chip, for it is so small. I told him three times he should do something about it. It is in a place where there are no nerve ends, so there is no pain. Paul assured me that he would have the tooth capped, but - unfortunately - he has not done so. Could he be afraid of the dentist? It is my opinion that he will just let it be." 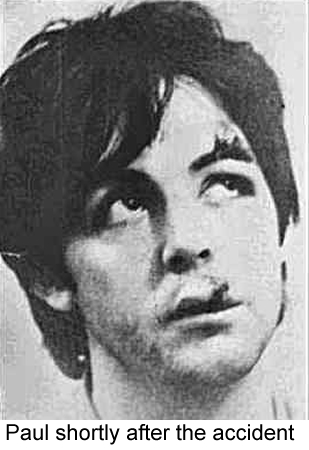 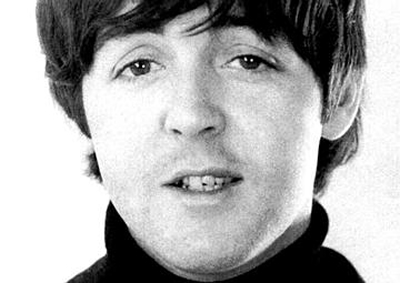 The Beatles were getting ready for Christmas......